The first HacktionLab took place between 13 - 15 June 2008, click here to view a slide-show of photos from the weekend. There are more photos posted here and this exciting short video too.

The next HacktionLab will be taking place in June, from the 11th till the 14th, visit this page for more information and to get involved 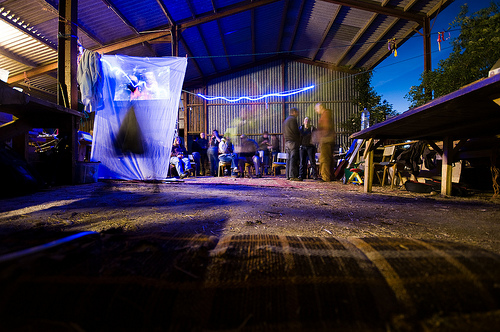 The aim of HacktionLab is to have a convergence where people interested in and/or working in the areas of alternative media, renewable energy, on-line video distribution, free software and any other form of activism that utilises technology. The idea for the gathering has come from a number of years of experience gained by activists working for organisations such as Indymedia and includes specific experience from involvement in the Horizone Eco-Village in Stirling (2005), the Camps for Climate Action in Drax (2006) and Heathrow (2007) as well as the No Borders camp at Gatwick (2007): 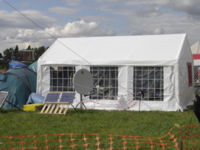 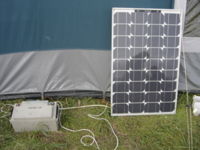 Per person we will aim that the convergence will require around a fifteen pound contribution, with an upper limit of twenty. Everyone will be responsible for organising their own transport to the location, except for being collected from Chepstow train station.

The convergence is primary aimed at folk who need to learn or share info on doing mobile media access and video work in situations like G8 and climate camp convergences.

Please come if you have experience(s) to share will others in order to encourage the amount of shared knowledge in the UK-wide media, free software and alternative technology activist network. The weekend is most suitable for activists using media, geeks and hackers (as opposed to crackers) but would also be of interest to anyone else that is interested in attending is most welcome.

This convergence is being proposed and attended by Bristol Wireless, Indymedia UK, Schnews and Clearer Channel.

Would recommend that crew arrive Friday morning (or Thursday evening) to set-up some of the infrastructure, and anyone who wishes should be encouraged to be involved in this, as the set-up forms part of the skills sharing.

We decided upon Highbury Farm located in the Lower Wye Valley on a hill above the village of Redbrook. Highbury Farm is actually located in Gloucestershire, although it should be in Gwent. (location of site on Multimap and Google Maps also Aerial View Map of the site) 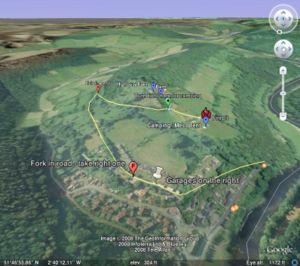 Highbury Farm is a vegan (perhaps vegetarian) farm and the owners request that meat is not brought or cooked on site. There is an excellent pub (the Boat Inn) across the valley within walking distance that serves fine ales and ciders and may well serve meat dishes for those who cannot do without.

The workshops should be simply facilitated discussions and hands-on skills-sharing activities based around a technology or a way of doing something. The aim is to enable a free exchange of ideas based around a theme, and not too much time should be spend in their planning.

Here is a working list of topics for workshops, please feel free to add to it or propose yourself and a workshop you'd like to facilitate:

There is a source for workshops available for ideas http://clearerchannel.org/guides/s_index.html

More to follow on IMC uk and global internet sites using Drupal We should have a test site to play about with with amazing aggregation and syndication abilities.

What makes a friendly tech enviroment?

Sometimes geek environments can be really cold and alienating to non-geeks. Sometimes they can be terrifically welcoming. What are some of the things we can do as enthusiasts to communicate our enthusiasm and share our skills in a friendly way?

Have a look at this blog post about the recent Transmission gathering in asia http://burningbulan.multiply.com/photos/album/17/TX-AP

And read this critique of gender in Indymedia. can anyone find one?

Kids are most welcome, however we will not be arranging any crêche facilities.

Evening events could include a couple of bands, some open mic, some poetry, and some decent organic cyder around a fire of course ;)

Access to Highbury Farm by vehicle is somewhat difficult as it is situated up a steep hill in the valley. Most motor vehicles should ideally be left at the bottom of the hill rather than be taken up the track. For small vehicles, carrying the minimum of passengers would help. There is a decent footpath up from the village to the farm, so leaving vehicle at bottom and walking is a good option.

There's more info on their web site at http://www.highburyfarm.freeserve.co.uk/visitingframe.htm and also here it is on the map:

From Bristol the farm is about 30 miles, over the old Severn Bridge (M48) and then taking the A466 past Chepstow and about 13 miles up the Wye Valley. The bridge costs something like 5 pounds 30 pence for cars and 10.50 for vans.

Firstly, for those of you with satnavs, the postcode is NP25 4LX

Now the farm is on a very steep hill and the folk here are saying they would prefer people not to drive up.

So if you're driving, you'll need to park down the bottom alongside the A466 Wye Valley Road, there is a car park past the village green on the left (river) side and then walk up. To get up here, you need to follow Offa's Dyke footpath, up the hill behind the Bell Inn.

Because of this make sure you pack your stuff according to having to hike up a big hill! If you come up with you essentials first and then you can get a hand making a second trip. Any real problems or if you physically can't get up here for some reason, please ring in advance to let us know.

Any problems just ring. If you can't get through, wait a bit and try again.

Trains to Chepstow, there is then a bus service (69) from Chepstow to Redbrook village, but the last bus leaves the bus station at 6.10PM - You can download a PDF of the bus timetable here. We may have a therefore have runner to collect people from Chepstow train station on Friday evening, should there be a need to do so. Phone one of the numbers above if you need to be collected, please try to give us notice.

From Bristol catch the X14 to Chepstow, then follow the directions above for catching the 69 bus to Redbrook.

There is both main electricity and Internet connectivity at the farm. We will also bring 3G and satellite alternatives to demonstrate and discuss the technology. It would be great to have some renewables for the camping field for the evening. In the camping field there will be a fire pit, pissoirs and a shit pit.

Immediate requirement is for more folks to get involved, this is a workshop event, so all those who come should also expect to be involved in making the whole thing happen, so although we will plan for the equipment to bring, it will be an organic affair (not in the sense of vegetables).

Please encourage other people to get involved by asking them that they join the mailing list at http://lists.psand.net/cgi-bin/mailman/listinfo/hacktionlab

The cost was fifteen pounds per person for camping and food (six meals) for the weekend. This figure also included a few additional costs for transport of equipment (and tolls for Severn Bridge). We were pleased to be able to make an additional donation to Highbury Farm from the donations received. Everyone was responsible for organising their own transport to the location, except for being collected from Chepstow train or bus station. 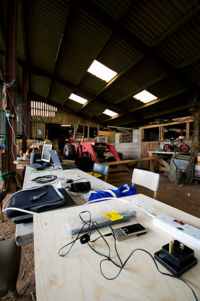 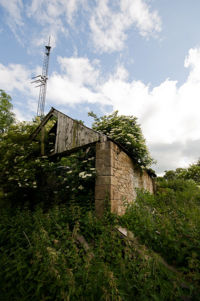 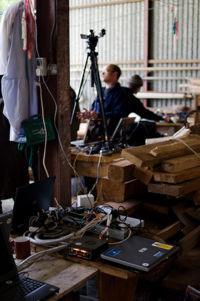