The Free Software Movement: what lessons could the anarchist movement learn?[edit] 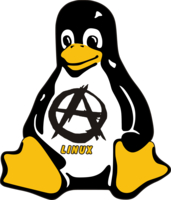 The Free Software movement can be said to have begun in 1983 when Richard Stallman launched the GNU project. Since then a global network of projects worked on by individuals and organisations in a largely non-hierarchical fashion has gradually infiltrated the world of proprietary software. It has been subject to successes and failures, been co-opted and has changed the information technology world from within. What parallels are there with the anarchist movement and how does it fit with anarchist philosophy? Are there any lessons to be drawn from the Free Software movement that could be useful in anarchy's approach to gaining wider acceptance?

Software can be copied without resource. Hard resources cannot.

But software can be said to serve its users only if it respects their freedom. What if the software is designed to put chains on its users? Then powerfulness means the chains are more constricting, and reliability that they are harder to remove. Malicious features, such as spying on the users, restricting the users, back doors, and imposed upgrades are common in proprietary software, and some open source supporters want to implement them in open source programs."

The differences between these two terms are not really understood. They have emerged as terms based on radically different philosphies. Here's a quick look at some differences.

There are a number of very strong parallels between the two movements, though they share no common historical source. It must be remembered that Software as a resource can be copied virtually free of cost, whereas Anarchist movements which concern primary production deal with items which cannot be reproduced without labour.

There's no given structure to a Free Software project. Adoption of roles within a project is commonly ad hoc. Many projects do end up with strong leaders, though this role is by no means granted through entitlement or ownershtip, and can be as fleating as the morning mist if decisions aren't liked.

Keeping software free has been a fight. It will continue to be a fight. We will ilucidate some responses to co-option and take over.

We might also draw parallels with the smashing of Mc Donalds restaurants and cyber attacks.

Free Software projects work together towards a common goal. Methods for relieving dis-unity are understood and practically applied.

Free Software as a movement has a core philosophy, based around the four freedoms. These four freedoms are there to promote social solidarity.

In Free Software results in a situation where all our labour (work on the code) is given as a resource for everyone else.

Free softwares licensing is an attempt to allow sharing whilst preserving freedom.

The four freedoms apply to everyone on the planet. If we discover life on other planets, it will be apply to them too. Anyone can contribute to Free Software.

Anarchism works well at a local level and the same can be said of most social, cultural and political movements in general. There can be a struggle to achieve wider general acceptance, especially in these days of mass controlled media and information and campaign overload from social networks. Free Software grew-up on-line, literally in the case of Linux, and has blossomed at a global level with collaborations from across the globe. Software is often highly specified, has clear deliniations of requirements and tasks to be done, and therefore lends itself to loose, distributed networks of collaborators, whereas social movements often do not. It's relatively easy to make a finte technical decision in a chat channel or mailing list, whereas agreeing an political approach is much harder in this medium. In fact it is unlikely that Free Software would have been successful without the Internet, as there would not have been the interest, skills or uptake available at the local level.

As the entire source code and all intellectual investment in Free Software is available to all, whether directly active or solely a consumer or observer of a project, there can be a lot of value in forking the software and starting a new splinter project should some users be unhappy with the direction it's going in. If it turns out that one group, company or individual is acting tyranically over other users and developers, then this forkability makes walking away from tyranny much easier. For anarchist movements it is more difficult for a splinter group to take with it the investment and it is harder for it to garner as much immediate legitimacy because of this.

We looked at this in last years talk, concluding that Free Software had held fast in the midst of hostile take over attempts and other such worries. MySQL's purchase by notorious proprietary software mungers resulted in mass walk outs and project forks (Libreoffice, MariaDB).

There are more subtle ways in which Free Software is subverted by the evil though.

Much code is contributed by corporations. For example in X.org, 30% came from independant developers, 70% from corporate paid contributors. This kind of seems right, since it's support for hardware they produce, but how right is it? This is possible topic for inclusion, but it a somewhat peripheral issue.

Why would we want to learn lessons from Free Software?[edit]

Clicktivism and the problem of political engagement lite[edit]

Total 1 hour back-to-back, but 50 minutes in the room, splits down into: