Be The Media Cybertent at Big Green Gathering 2009[edit]

Under intense pressure with the threat of a court injunction hanging over them, the directors of the Big Green Gathering were forced to hand the licence for the event back to Mendip District Council on Sunday 26th July: the event was therefore canceled. We are looking into preparing a replacement Be the Media event sometime in the future, and deeply lament what may well lead to the demise of the Big Green Gathering. Many people have either lost or come close to loosing their livelihoods over what can only be described as wholly irresponsible action on the part of Mendip District Council. Here are some relevant links:

in association with Bristol Wireless, Clearer Channel, Indymedia and others is a space at this year's Big Green Gathering festival, running from 29th July - 2nd August 2009. It's the beautiful union of what were two different spaces in 2007; the Bristol Wireless Cybertent and the Be The Media tent.

The Be the Media space is the place to find out about DIY media and get involved in a host of exciting debates and practical workshops about everything from producing your own media to intellectual property, copyright and the Creative Commons. The space also features a suite of recycled computers providing daily solar and wind powered Internet access courtesy of Bristol Wireless and evening cinema showing independent grass-roots films as well as an info stall and photo exhibition. Check the board outside the space for up-to-date details of what's on.

Following the recent G20 protests in London and the advent of social networks and other web 2.0 tools, Indymedia's raison d'être is possibly now even more relevant than it was when it started nearly ten years ago. One strand of workshops will look specifically at Web2.0 tools and how to use them for campaigning, reporting and for organising, as well a strategy session looking at the value of Social networking for social change.

Practical how-to 'Be The Media' sessions will cover how to make and publish short videos, audio podcasts and radio streams, how to use mobile phones as a tool for media activism, how to connect your laptop to 3g for mobile reporting, and how to get started reporting for Indymedia.

With campaigners, media activists and journalists all coming under increasing attack from authorities and the police, a special workshop will focus on legislation being used by the police and tips and tactics for dealing with them, whilst another workshop will provide an essential guide to privacy, security and encryption.

Alongside, other workshops will cover offline campaigning tactics like stencilling and creating your own newsletters as well as tips on how to deal with the mainstream media. The space will also feature sessions looking at free software for organising and educating as well as issues around creative commons and open source.

(NB this final FINAL version of the workshops timetable has a few differences to the main BGG printed programme - we'll have to put updates up on the big board :)

Click here to see the latest version of the programme on google docs - it's the same as jpg below: 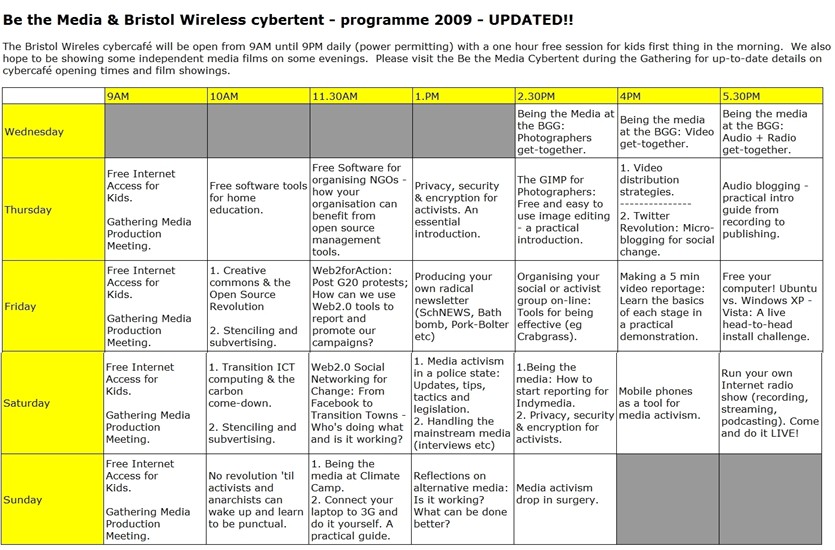 The Be the Media / Bristol Wireless Cybertent is a collaboration between many individuals and groups including alt media Indymedia types. It has been planned with the support of HacktionLab

HacktionLab is an ongoing convergence of people interested in and/or working in the areas of alternative media, renewable energy, on-line video distribution, free software and other forms of activism that utilises technology.